Once one starts to enumerate the areas in which he was active, it is an impressive list: he made TV programmes and radio programmes. He was an author. “Das Jazzbuch” has remained in Fischer’s catalogue since 1953, has gone through new editions and reprints right up to 2014- the most recent edition has been extended and brought up to date by Huesmann. “Das Jazzbuch” has been translated into several languages, and sold one and a half million copies, which may make it the best-selling book about jazz ever. He was instrumental in the development of jazz festivals in general, and of Jazzfest Berlin (Berliner Jazztage) in particular, of which he was the first Artistic Director. He was a record producer. He started the Free Jazz Meeting in Baden-Baden, which is about to celebrate its 50th edition. His collections of books and sound recordings became the seed for the Jazzinstitut Darmstadt, which despite being named after the town which hosts it is one of the leading research archives in the world. He also employed bandleader Kurt Edelhagen at SWF. That initiative the led to Edelhagen being poached by WDR, with whom he was to stay for over 15 years. Dr Bernd Hoffmann has in fact written a fascinating monograph about Edelhagen and the way his band was presented in TV programmes. These are just some examples of Berendt’s massive legacy.

The discussion between the two speakers also sought to define Berendt’s overarching mission, and to explain and elucidate where his level of determination – and his success – stemmed from. His father had been a pastor, and active in the opposition against the National Socialists, and had been killed in a concentration camp. So in Berendt’s determination to advance the cause of jazz some key themes emerged: “He wanted jazz as an equal voice in music. That vision marked everything he did. He was a very multi-layered person…he was a political being…what he brought to jazz was a genuine passion…. He was an activist… a virtuoso in his communication.”

Through sound clips from the time, anecdotes and examples which were handed round the delegates of Berendt’s weekly planner, a vivid picture of the man emerged.

The time at which he worked was also key. He was a man in the right place at the right time. In the aftermath of the war, perhaps his determination to move jazz on from being “dance music” and considered an art from on a par with classical music was a deep detemination that the future of German culture would be different.

As a pioneer, and a substantial ego, Berendt is not without his detractors. He also had a way of making sure that his name was attached to things. His nickname in Germany – still to this day – is “der Jazzpapst” (the jazz pope) which has mostly negative connotations relating to the extend of his dominance. I was aware, for example, that he includes a bare-faced lie in his autobiography: he claims to have “given” his archive to Darmstadt, whereas in fact he sold it to the city.

As I listened to the dialogue of Huesmann and Hoffmann, I kept thinking of the phrase which appears on the grave of Sir Christopher Wren the architect of St Paul’s Cathedral: “Si monvmentvm reqvires, circvmspice.” (If you seek his monument, look around you.) Evidence of the structures that Berendt put in place or were copied by others survive everywhere in German jazz. And these thougts were amplified by the the fact that this meeting happened just four days before all the heads of the Jazz-Redaktionen were invited to Schloss Bellevue, the official residence of the German President in Berlin. What better evidence can there be that jazz has a firm place and visibility in contemporary German culture. Surely no person can have done more to make that vision into a reality than Joachim-Ernst Berendt. 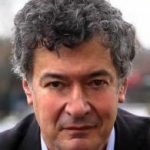 Radio Jazz Research is such a brilliant concept for the sharing of knowledge. It works so well in practice, it could be a model for people in many sectors to learn from and to follow. The range of participants is always very broad, yet all are united by a common enthusiasm for and knowledge of the music. The result is that the topics are always illuminated from a much wider range of perspectives than is the norm.
I also have huge respect for the ethos of the discussion, where there is genuine sharing of expertise. It is not what the English call “Chatham House”; nor is it what the French call “comité restreint”. It is in fact something better. RJR has created an environment where differences of opinion are respected, valued and used to build better understanding. And that is something of which the world is in desperately short supply.